Jarvi has already started breeding $N$ different dinosaurs. His Jurassic Jungle will have exactly $N$ dinosaur-homes (called dinohomes), numbered from $1$ to $N$, each with exactly one dinosaur.

Jarvi knows the secret of keeping dinosaurs happy: every day, each dinosaur must be able to walk around Jurassic Jungle, visiting all other dinohomes, and safely return to his own dinohome before midnight.

To achieve this, Jarvi will build $M$ bidirectional roads, each connecting $2$ different dinohomes. Jarvi does not want to build more than one road between any pair of dinohomes.

However, this is not an easy task, as dinosaurs are not good with directions. Starting from his dinohome, a dinosaur will randomly select any dinohome that he has not visited before, and walk there. 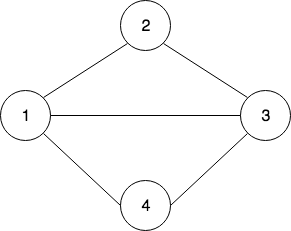 Consider the dinosaur in dinohome numbered $1$:

Thus the dinosaur at dinohome $1$ will NOT be happy, since he might not be able to visit all other $N - 1$ dinohomes, depending on how he chooses the path.

Let’s also consider the dinosaur in dinohome numbered $2$. Starting at his home, he can walk to dinohomes $1$, $3$ and $4$ in this order. At dinohome $4$, this dinosaur has visited all other $3$ dinohomes, but he cannot directly walk back to his dinohome. Thus the dinosaur at dinohome $2$ will NOT be happy.

Please help Jarvi build his Jurassic Jungle so that all his $N$ dinosaurs are happy.

For each test case, if it is impossible to build a Jurassic Jungle satisfying the given conditions, print a single line containing ‘NO’.